The 2001 adaptation of Fruits Basket was one of my favourite anime in my childhood. I completed the manga several years ago, and I was so excited for this adaptation. I’ve put it on hold, but I know that I will continue it once the events go further into the deeper and “darker” sides of the story.

As a child, I looked up to Tohru. I wanted to be kind like her. Now that I am 22 years old, my opinion of Tohru has changed. This may sound harsh, but I don’t like how she pretends that everything is fine, when things are not. It feels dishonest and frankly, fake to me. I don’t like how Yuki, Kyo and her other friends constantly protect her. I think that while we can certainly count on our friends, we should be more independent. This is why I’ve put Fruits Basket on hold…

I’ll be continuing this one in the Summer 2019 season. I still think that Tanjiro is an inspiring character (Read this post if you want more information). Nezuko is so adorable.

I’ll be continuing this show into the Summer season. The art took a while to get used to, but I fell in love with the music from the start. The song Carole and Tuesday picked in episode 12 moved me…

Attack on Titan Season 3 Part 2 was more focused on titan action, and it was pretty intense to watch. The end of it was on learning the history and there were some interesting reveals. I really enjoyed the intense moments of this season!

I used to really enjoy Dororo, but now I’ve put it on hold. The beginning was interesting and then it became repetitive. The story-telling is good, so I will most likely go back to it one day. I hear the ending is amazing, so that’s motivating to hear.

6. The Rising of the Shield Hero (Continuing from last season)

I’ve blogged about Shield Hero and you can read my closing thoughts here.

Naofumi and his party had to clean up Ren’s mess. Ren is more likable than Motoyasu, but he’s not that great of a hero either. He believed the rumors about Naofumi too easily and is too arrogant to be likable.

Filo’s friendship with Melty is so cute! I really like Melty. Although I knew that she was from a rich family, I was a little surprised to learn that she was Malty’s sister and the heir to the throne.

The Church of the Three Heroes is sketchy.

The heroes argue way too much. It’s a little sad to watch.

Glass is so OP! I’m really interested in learning more about her. It was hilarious when she called the other heroes “Naofumi’s slaves.” I hoped it was a reality check for them, but that was expecting too much.

Melty is now part of Naofumi’s group and things have become quite interesting. It’s unbelievable how Malty would go to such extreme lengths to kill Melty and the others (but not really unbelievable).

Naofumi and his names…

Van Reichnott is such a nice nobleman! Idol on the other hand, is disgusting. 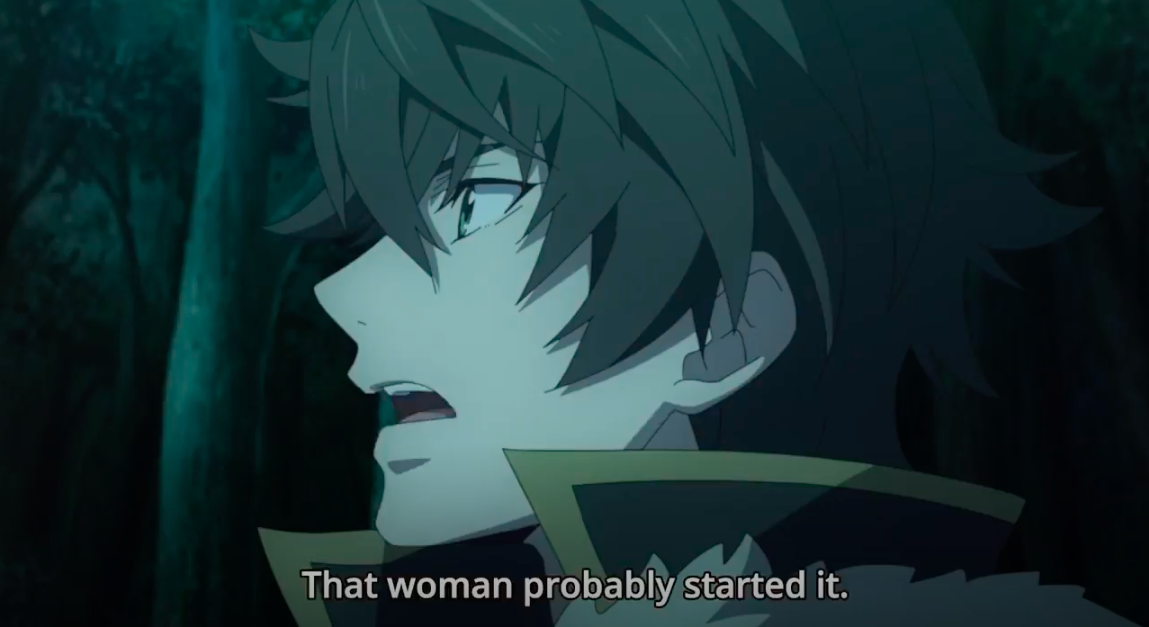 We learn about Raphtalia’s past and her experiences as a slave. Idol is rotten to the core.

We meet Fitoria, queen of the Filolias. She is huge as a filolia and incredibly strong. In her human form, she’s adorable. I guess we can guess how Filo will look when she is over a hundred years old.

Filo gets appointed as the next filolial queen!

I always thought that Malty and the king were the main antagonists, but I see that they were led by the Church of Three Heroes. I knew they were a sketchy group, although I was a little surprised by this reveal. The fact that it took so much for Motoyasu to finally see the truth is concerning.

I was happy to see Ren and Itsuki, even though I don’t particularly like them. I knew that they were still alive, and they came at the right moment. It was great to see all four heroes finally work together. 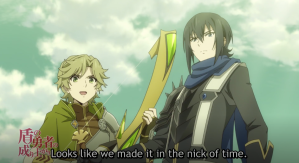 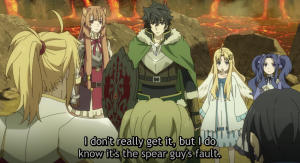 The queen finally made an actual appearance! It was messed up how the Pope used the believers of the church like that. I don’t think the believers of the Church are bad per se, but the Pope definitely has twisted morals. This was my favourite episode so far because the fighting was incredible to watch. I enjoyed seeing the combo attacks and the heroes working together. The last move by Naofumi was awesome. The opening song played during the fight and it was so cool!

The queen of Melromarc is now my favourite character. She is ruthless, even towards her own husband and daughter. She doesn’t turn a blind eye to corruption and she does things without delay. I liked how she decided everything in the trial and how she made it so that everyone in the country could learn the truth. Unlike the king, the queen doesn’t get fooled by lies. Changing the church to the Church of the Four Heroes was a brilliant move. Naofumi is such a nice guy by letting them go. Whether you think the punishment was enough is debatable. It felt so good to finally have Naofumi’s name cleared. It was about time! It was nice seeing the blacksmith and tailor again! This was one of my favourite episodes because it was pretty satisfying to watch.

Raphtalia and Filo finally got to level up. I’m guessing that the person Naofumi bumped into in Raphtalia’s old village will be important later on (potentially an enemy?). The series is almost over so I’m curious as to how much more will be shown before the anime is complete.

We meet L’Arc and Therese, and they team up with Naofumi’s party. I’m glad that Naofumi found “acquaintances” because his journey has been so rough. He finally got to have fun with the others. I think that L’Arc and Therese are good people, but there is something off about them. I am still skeptical at this point.

My suspicions about L’Arc and Therese were correct. Glass appeared again, and she’s on their side.

A new person joined Naofumi’s party! The story is definitely not finished, so I’m wondering if we will get a second season. The finale was sweet.

Closing thoughts: The Rising of the Shield Hero started off strong and episodes 18-21 were really fun to watch. Overall, I think this is a good isekai and recommend it!

What’s up? I’ve been working on a Shield Hero post but I’ll publish it once the series is complete. I have one more week of summer school and then I will have more time to blog and cosplay! I hope everyone is doing well!

Fukumoto All Stars is an adorable and funny manga featuring different characters from Fukumoto’s works. The authors had Nobuyuki Fukumoto’s cooperation and the characters are drawn in chibi style. This short manga is similar to Rock Lee & His Ninja Pals and Attack on Titan: Junior High.

It’s ideal if you have read or watched Kaiji, Akagi and other FKMT series because this manga relies on references to Fukumoto’s earlier works.

Thoughts: The art is adorable! It is quite funny, but the tropes get repetitive after a while. For example, Kaiji betting a limb to gamble because he doesn’t have money to gamble with.

If you have seen and liked the Kaiji spin-off anime, Middle Manager Tonegawa, then you’ll like this manga. (You can read my review on Middle Manager Tonegawa here.) You can finish reading Fukumoto All Stars in one sitting. The tropes become increasingly repetitive so I think the short length is appropriate. Overall, I think it’s worth checking out because you get to see the characters from different FKMT series interact with each other!