Monkey, also known as Journey to the West 西游记 or Sun Wukong 孫悟空, was written in 1592 by Wu Cheng’en. It is one of the Four Great Classical Novels of Chinese literature. Most Chinese people know the story because it became enormously popular through its television adaptations and plays. It influenced some of the earliest Chinese and Japanese animation. It also influenced many series like Dragon Ball.

I’m reading an English translation by Arthur Waley. Waley only translated 30 chapters out of 100. However, it’s still one of the best English translations out there. He omitted most of the poetry. If you like poetry, hopefully you can find a version that includes it. There is poetry in this one, but very little of it. 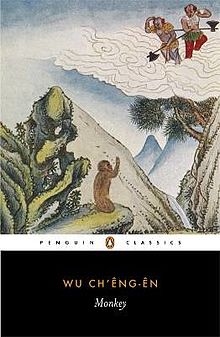 Synopsis: Monkey is “born” and becomes the Monkey King. He then trains under a Master and learns the secrets of immortality. Monkey then becomes very cocky in his abilities and creates havoc in Heaven. He challenges Buddha and loses terribly.

The above synopsis is only on the first part of the book. I wrote broadly because I didn’t want to spoil too much. The rest of the book will be on the pilgrimage to the West. Monkey travels with Tripitaka, Pigsy and Sandy to retrieve sacred scriptures and enlighten people about Buddhism. They face many adverse monsters and bodhisattvas along the journey.

I’m writing about the parts in isolation because there’s too much content to cover in the first quarter of the book. I divided the book in my own way: Part 1 ends when Monkey is punished by Buddha, before he begins the pilgrimage. Other people include Tripitaka, Pigsy and Sandy’s stories into the first part but I think those stories make up its own part.

There are lots of flaws, but it’s understandable because it was written in 1592. What I perceive to be “flaws” are:

I believe that television adaptations do a better job at these. However, nothing can compare to the book in my opinion, because so much happens in every page. No adaptation can possibly cover every single detail, whether it’s showing hundreds of thousands of men fighting against Monkey, or all the events that happen. Expect “ten years passed” thrown around every few pages.

One of the biggest reasons, in my opinion, why this story is so successful is because of Monkey. He is so clever, witty, confident and funny. Although he disturbs Heaven and so many characters, he’s so likable.

I recommend this classical novel to everyone.