I was thinking about Violet Evergarden and letters in general, then thought about the letters and cards I’ve received over the years. I actually keep the majority of them, any card or letter that contains a personal message. Some, I keep in a box in my room. The rest, I keep downstairs.

Some letters and cards are from people I am no longer in touch with. I think it’s natural to drift away from people. Then we meet new people. There is nothing strange about that. The people that were once a part of my life were there for me during my highs and lows. Their letters and cards serve as a way for me to remember them, and evidence of the good moments we shared.

I write letters. In fact, I rarely give people cards. Some people tell me that they love that I write letters. I think that it is sometimes easier to convey feelings through words. I spend a long time on my letters. I write with different coloured pens sometimes. I also decorate them with stickers and stamps. I hope that people enjoy reading my letters. ^^

As some of you guys know, I graduated in May 2018 with my Bachelor of Arts degree in Psychology. I am back in school now, doing my second degree in Social Work. I still attend the University of British Columbia, which was my top choice because I can commute from home and I have friends there.

I’m done my first week and I’m enjoying it a lot. I want to become a social worker, and I feel really good and confident about this decision. 🙂 It’s a two-year program and I have all my classes with the same 50~ classmates. 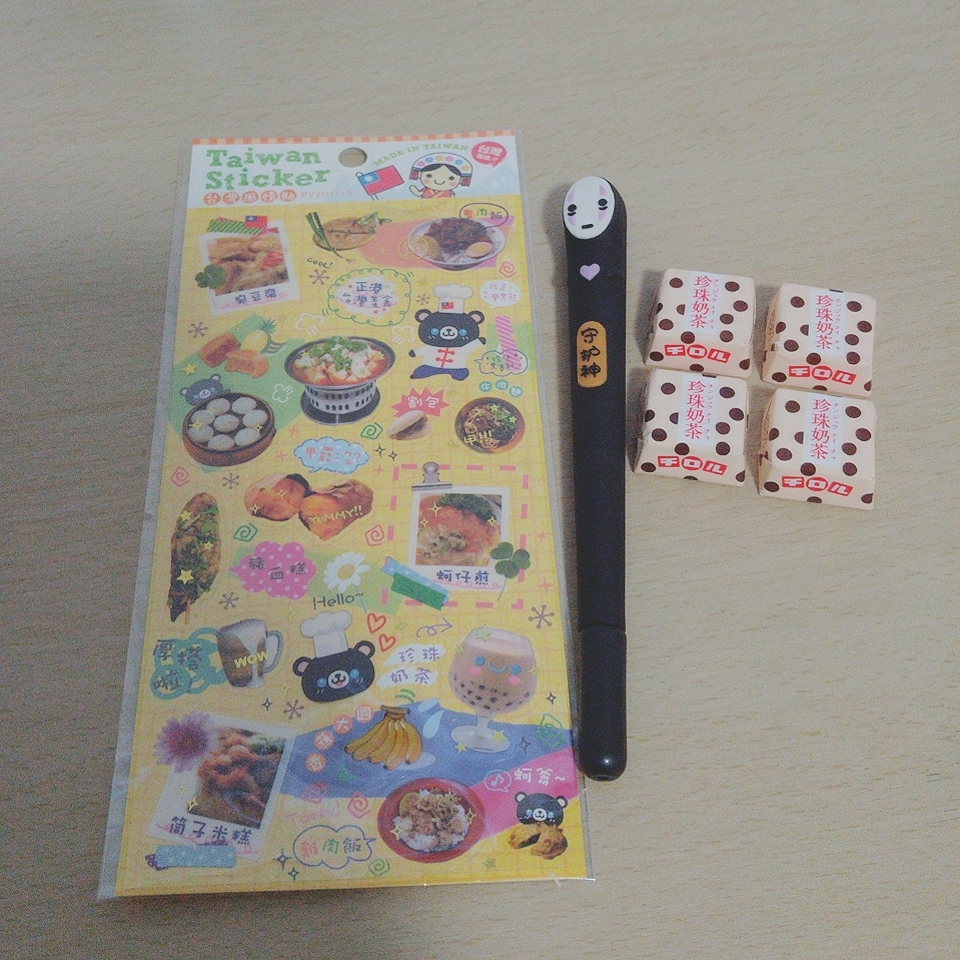 I had lunch with Moya on campus today and she gave me gifts! These are gifts from her Taiwan trip. I love stickers – I stick them on my transit card, notebooks, electronic devices, and letters I write to friends. I also love No Face from Studio Ghibli’s Spirited Away, so I really like the No Face pen. Lastly, I got bubble tea flavoured chocolate. I’ve never seen that before and I love bubble tea. Thank you, Moya! ❤

My friend, Carmen, went to Anime Revolution on Sunday, August 5 and gave me a signed poster of the Chinese cosplayers, Baozi and Hana. Thank you Carmen for lining up and for asking them to write my name. Baozi and Hana are two of my favourite cosplayers. 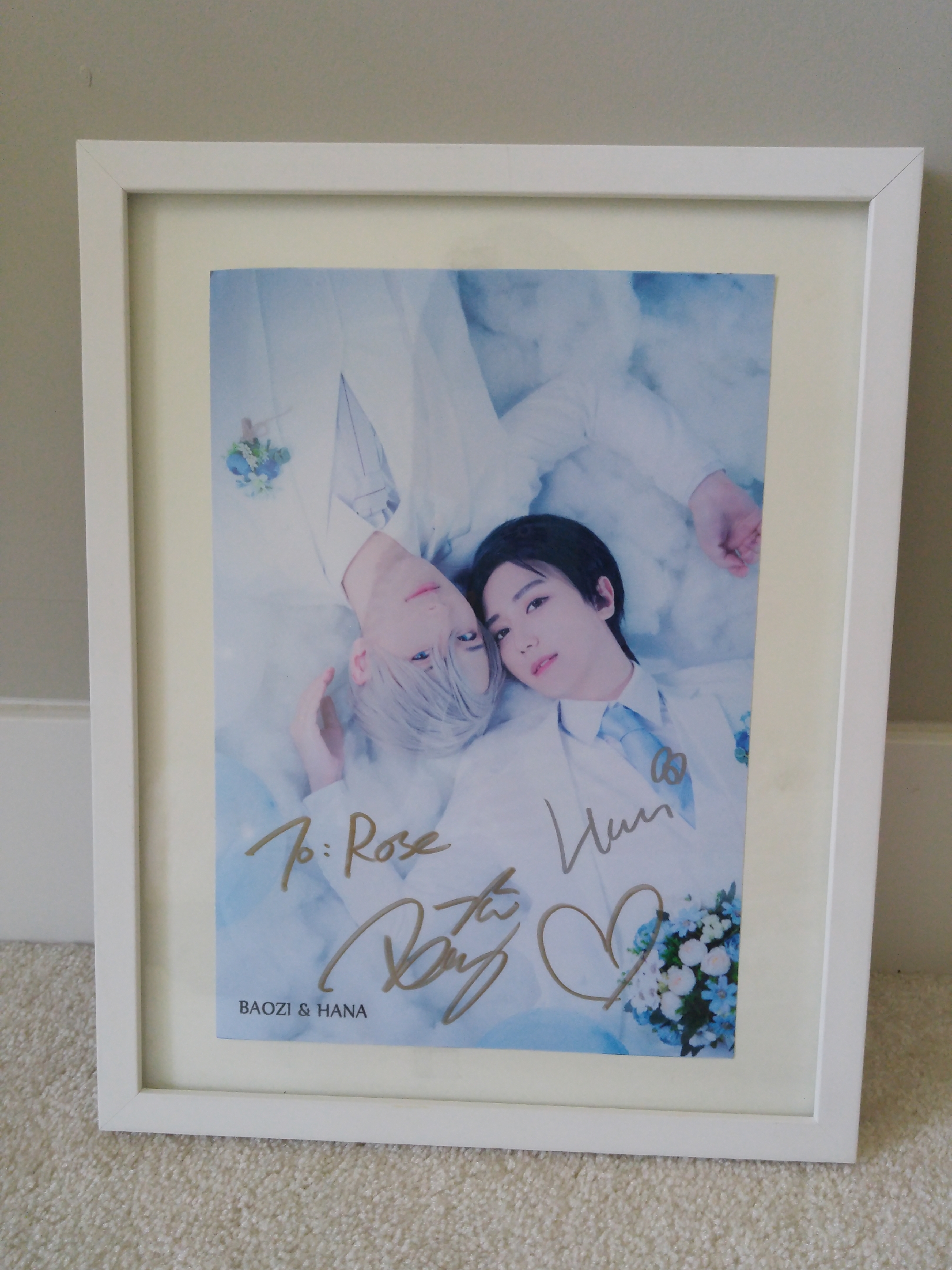 Maiko is a Japanese exchange student I met some months ago at a social event. She is returning home soon, so I had to see her again one last time.

We went to Suika in Vancouver, BC for lunch. I got miso ramen and it tasted great. 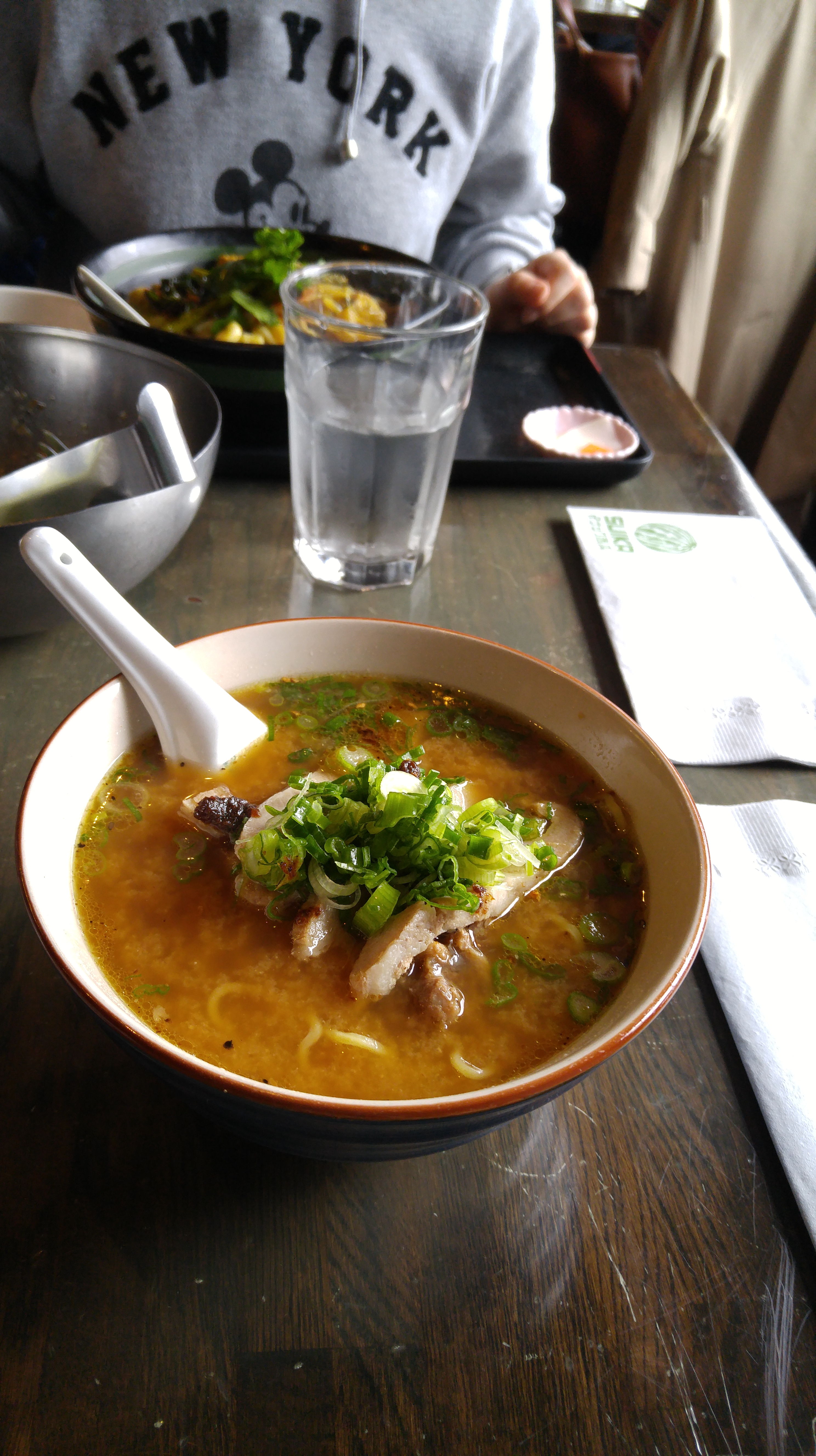 Even though I’ve only hung out with Maiko during that social event, she got me a gift. She is such a kind-hearted person, and so much fun to hang out with. I wish I got to see her more during the school year but life was so hectic. It’s a letter set from Japan with paper, envelopes, and stickers. 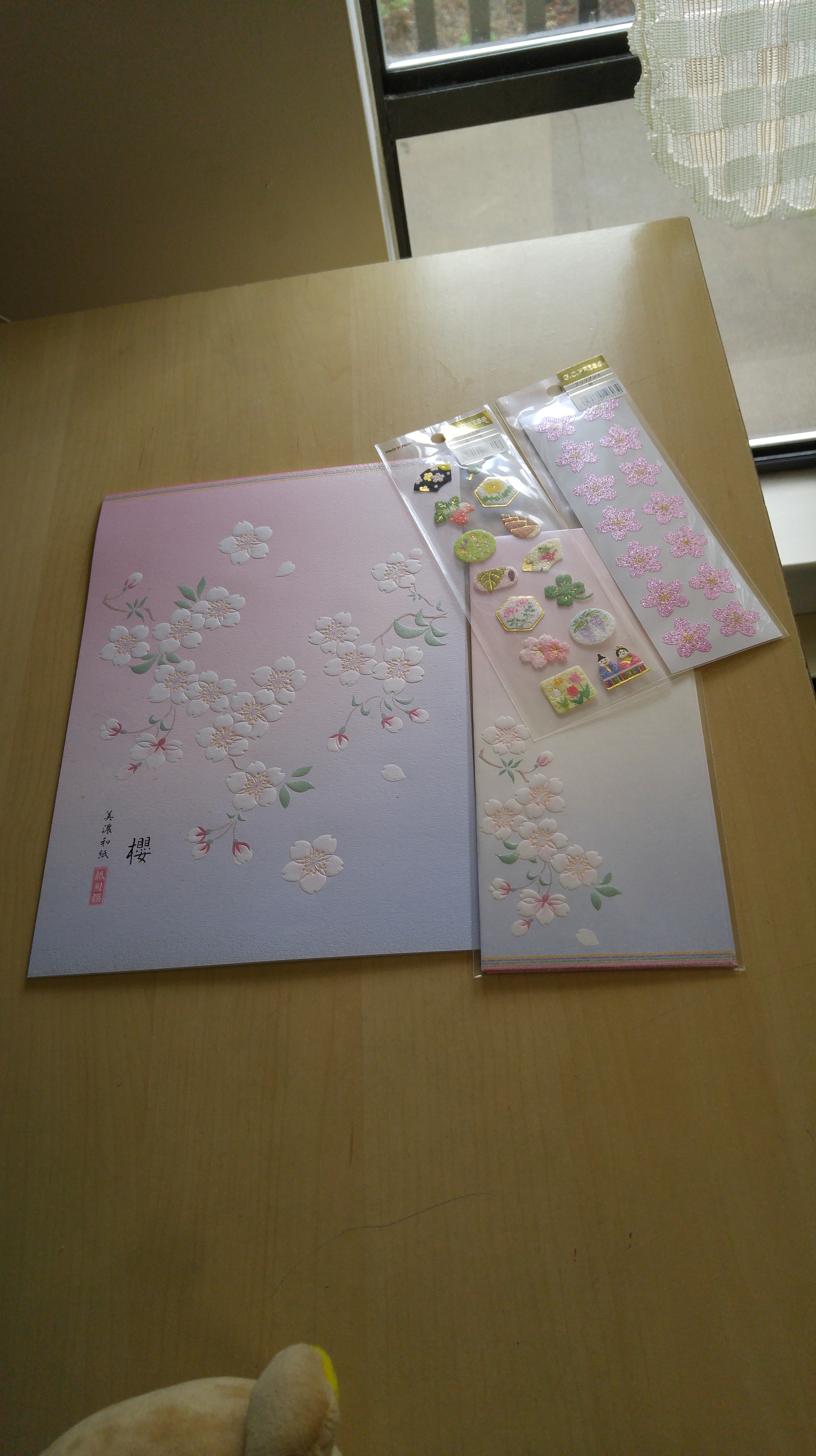 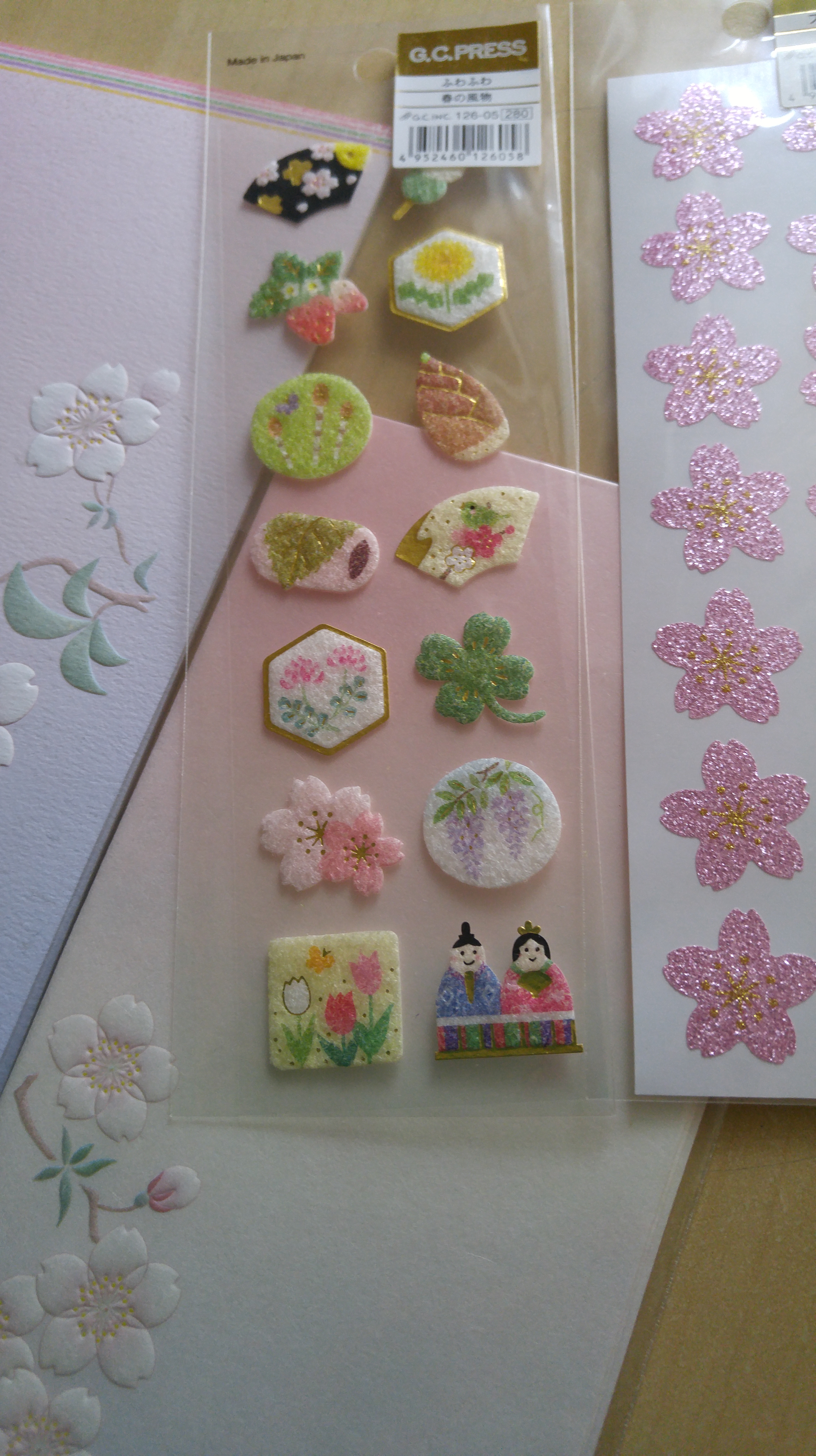 Details. This is really good quality.

I picked up a couple of cosplay things (brown short wig, and green sneakers – for Kido). We went shopping after our lunch and I also bought the video game, Star Ocean. Maiko bought way more things than me.

I’m really going to miss Maiko, but I’m glad I got to see her before she goes back to Japan.

I did a gift exchange with fellow blogger, Bambi. You should check out her blog! Bambi lives in America while I am in Canada.

I got the notebook from the anime, Death Note! P.S. I took these photos on my bed so that explains the stuffed animals. 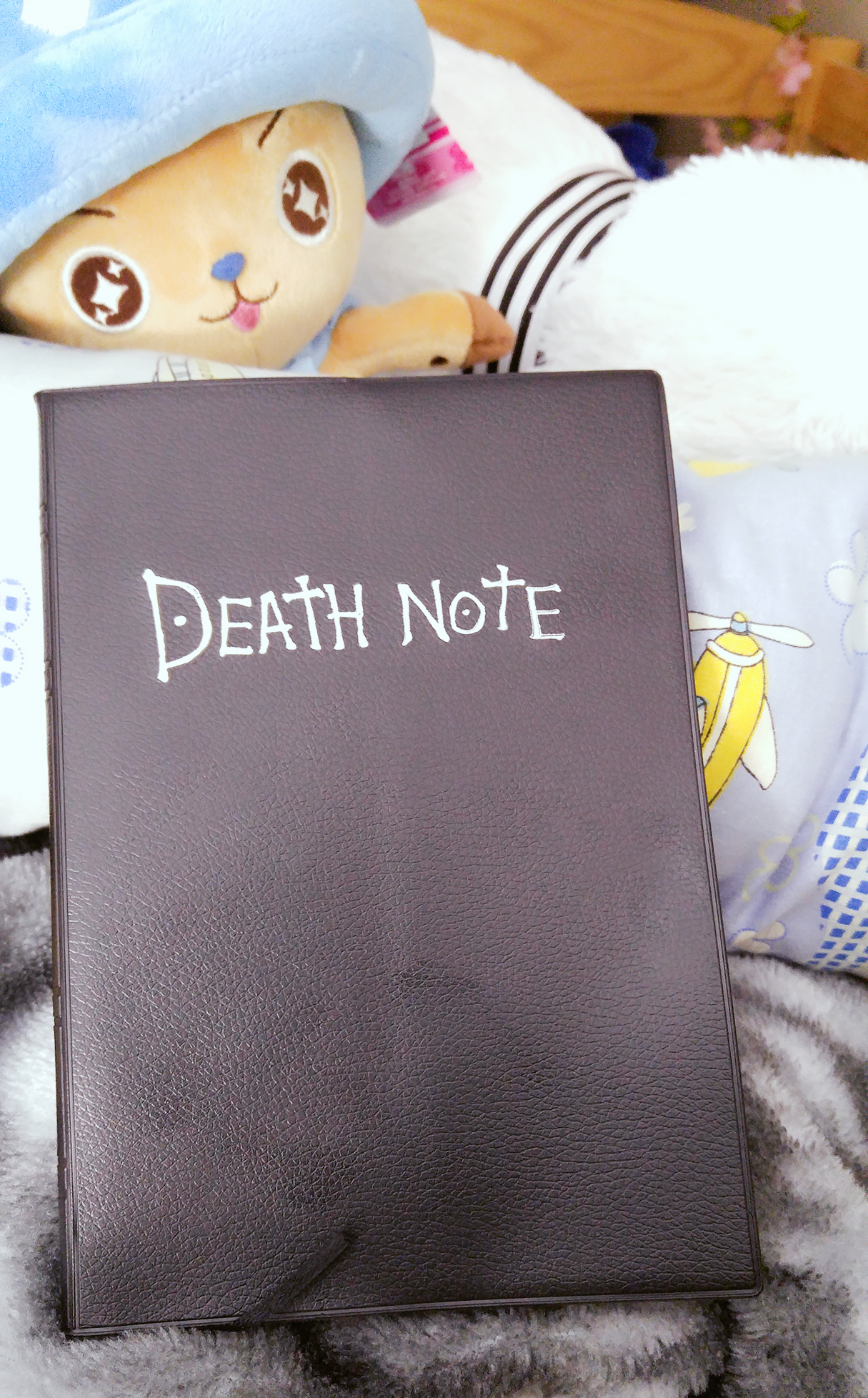 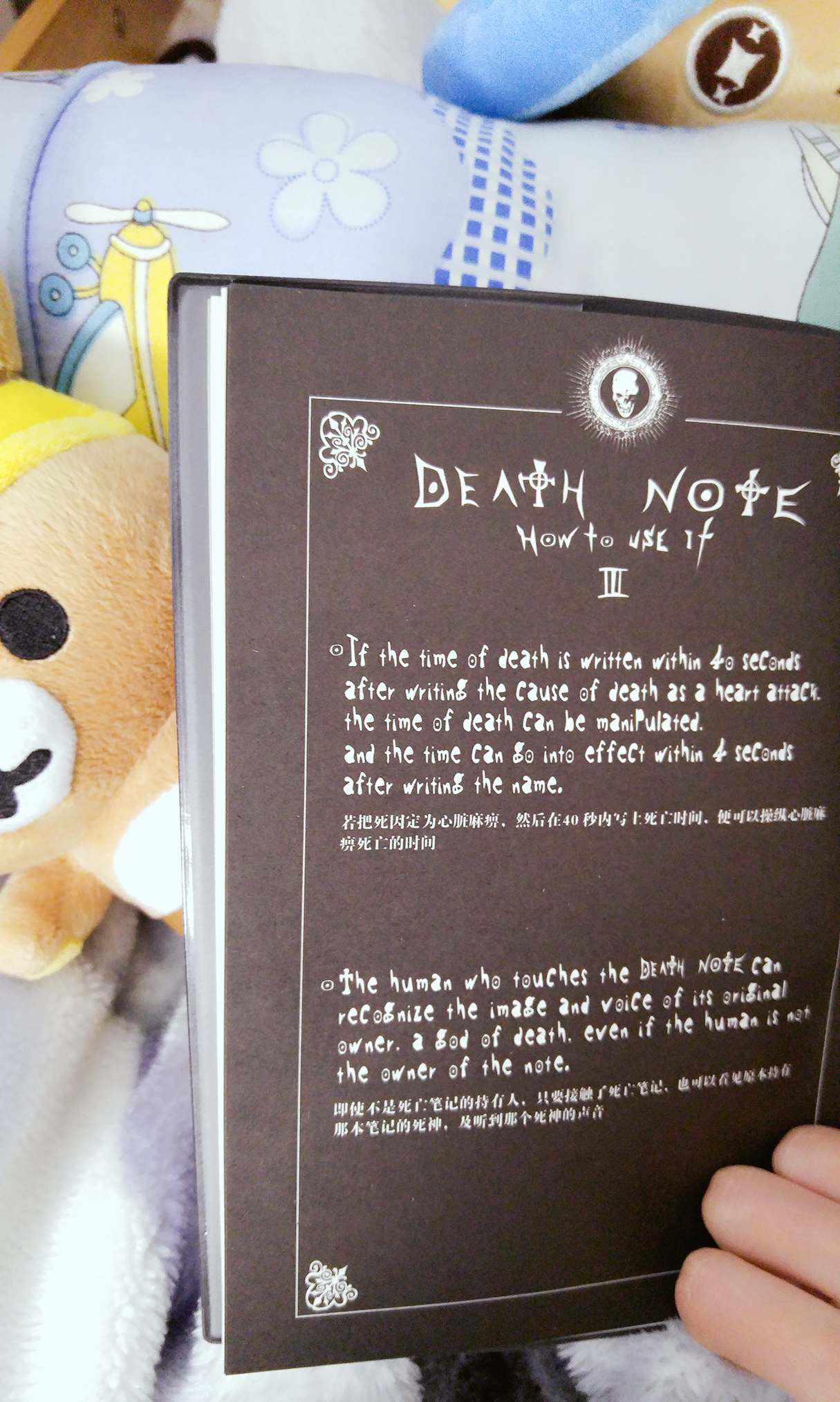 Third page of the rules 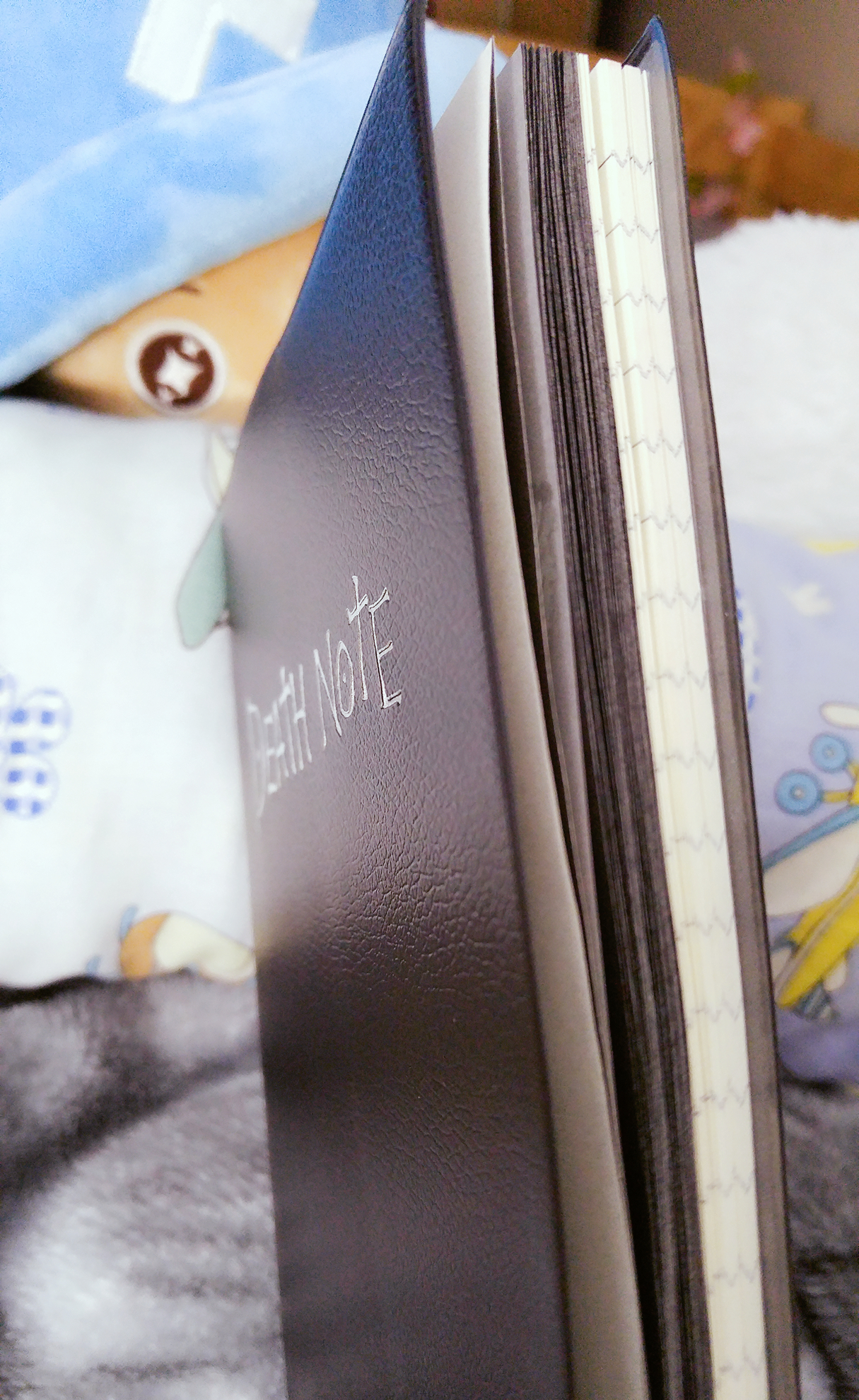 The rules are all there 😛 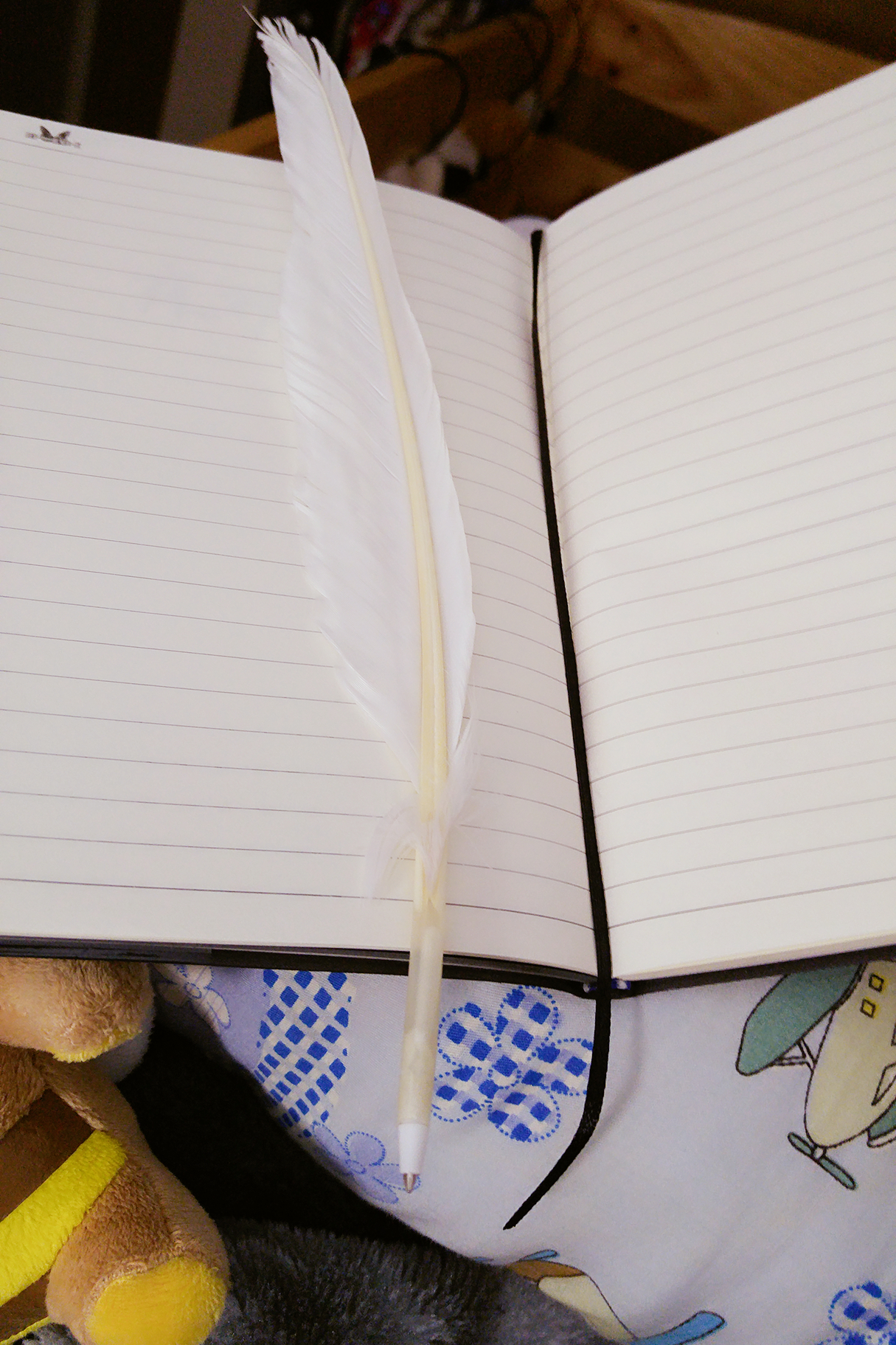 To my pleasant surprise, there are already names in here. The names of the actual characters who died are here. The writings are in Japanese Kanji. I appreciate this because it sticks closer to the original series and not the English dub. Do not fret, I can read some Chinese (which is basically the same as Kanji) which means I will help in translating. I’ll show some photos, but please – if you have not watched or finished the series but plan to, stop reading here. These are spoilers! I did not take photos of all the written names because that would be a lot.

The first name Light Yagami wrote in the Death Note: Kurou Otoharada. He was the criminal at the nursery home. Light tested out the Death Note by writing his name. 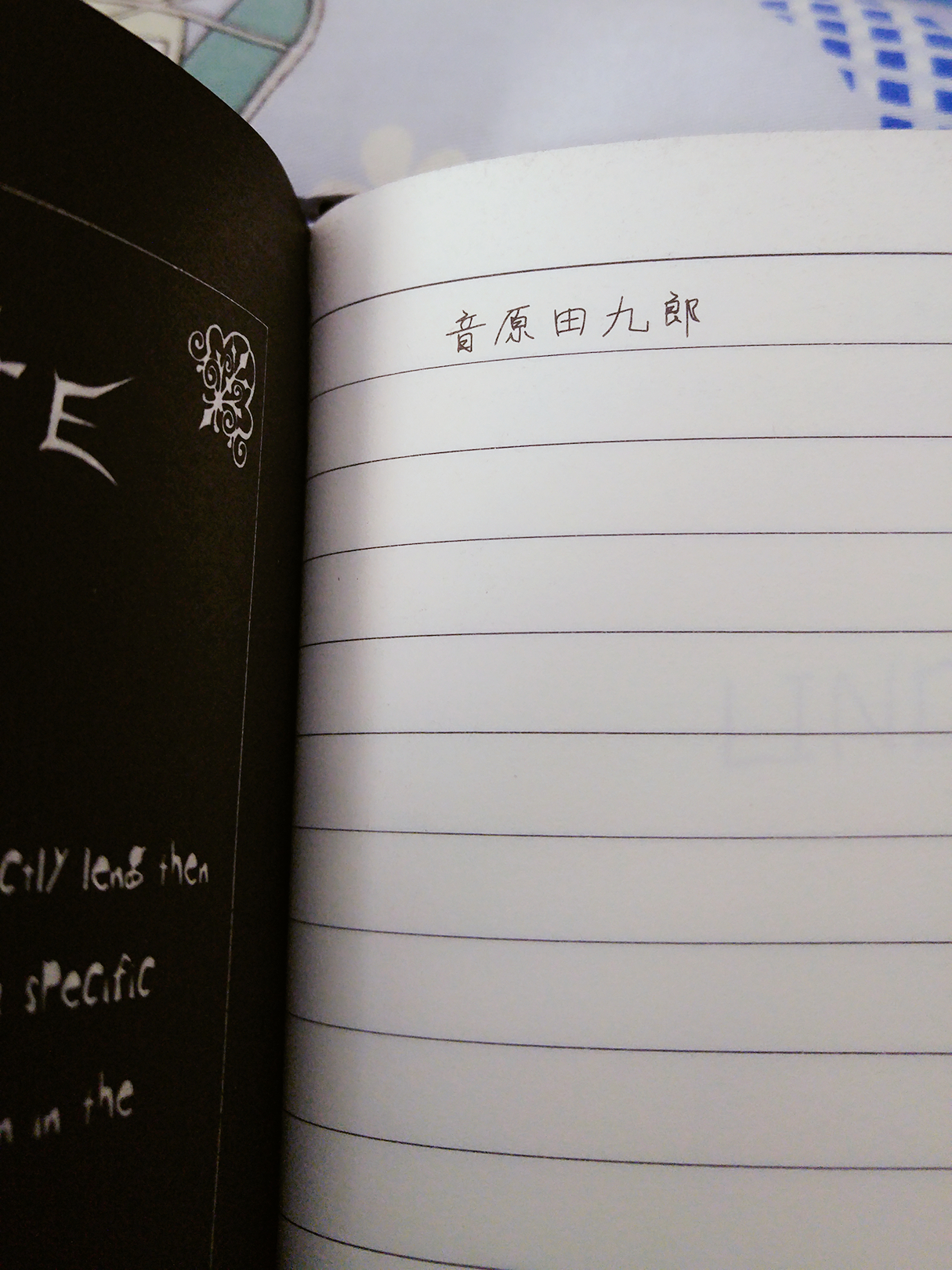 Takuo Shibuimaru’s name is written in different ways. Light wasn’t sure of the spelling of his name. He was the person on a motorcycle who was harrassing a woman. At this point Light was still testing out the notebook.

Lind L. Tailor was a criminal sentenced to die, and went on live television while pretending to be L. This was L’s plan to find clues on Kira. Light killed him, thinking that he was the real L. 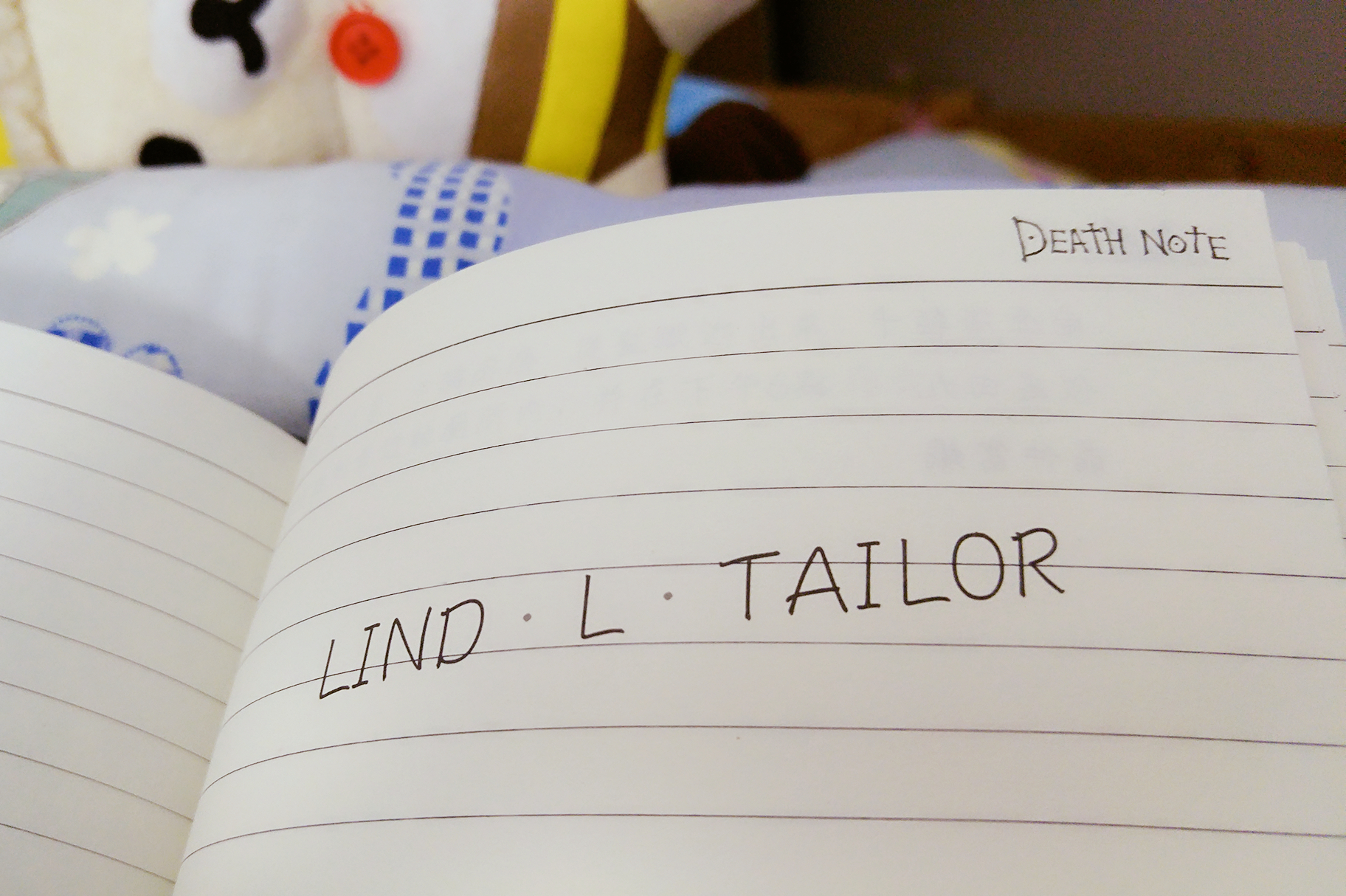 Light tests the boundaries of the Death Note by getting inmates to do strange tasks, before their deaths. 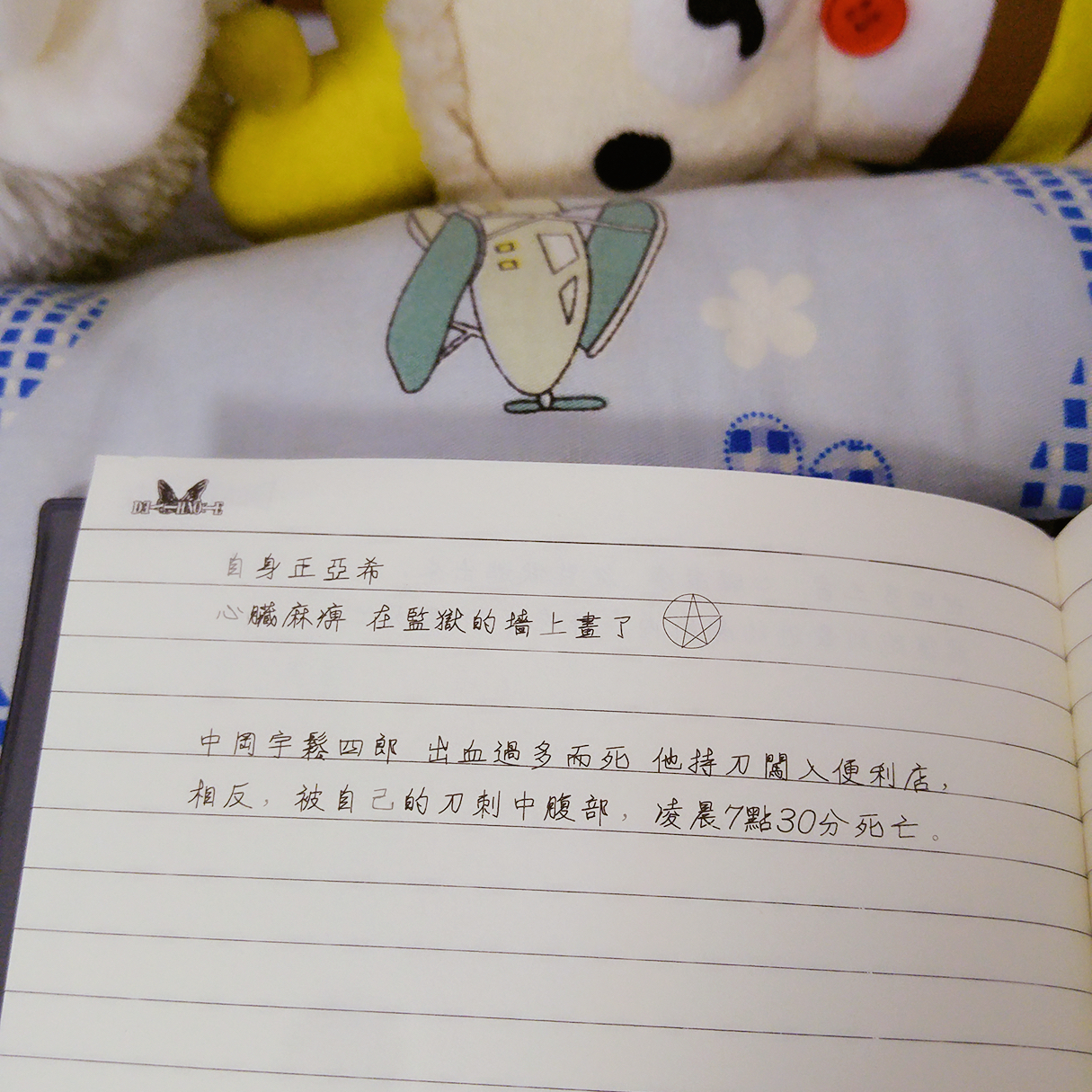 In order to get the identity of the agent following him, Light comes up with an elaborate plan involving the death of criminal Kiichiro Osoreda. 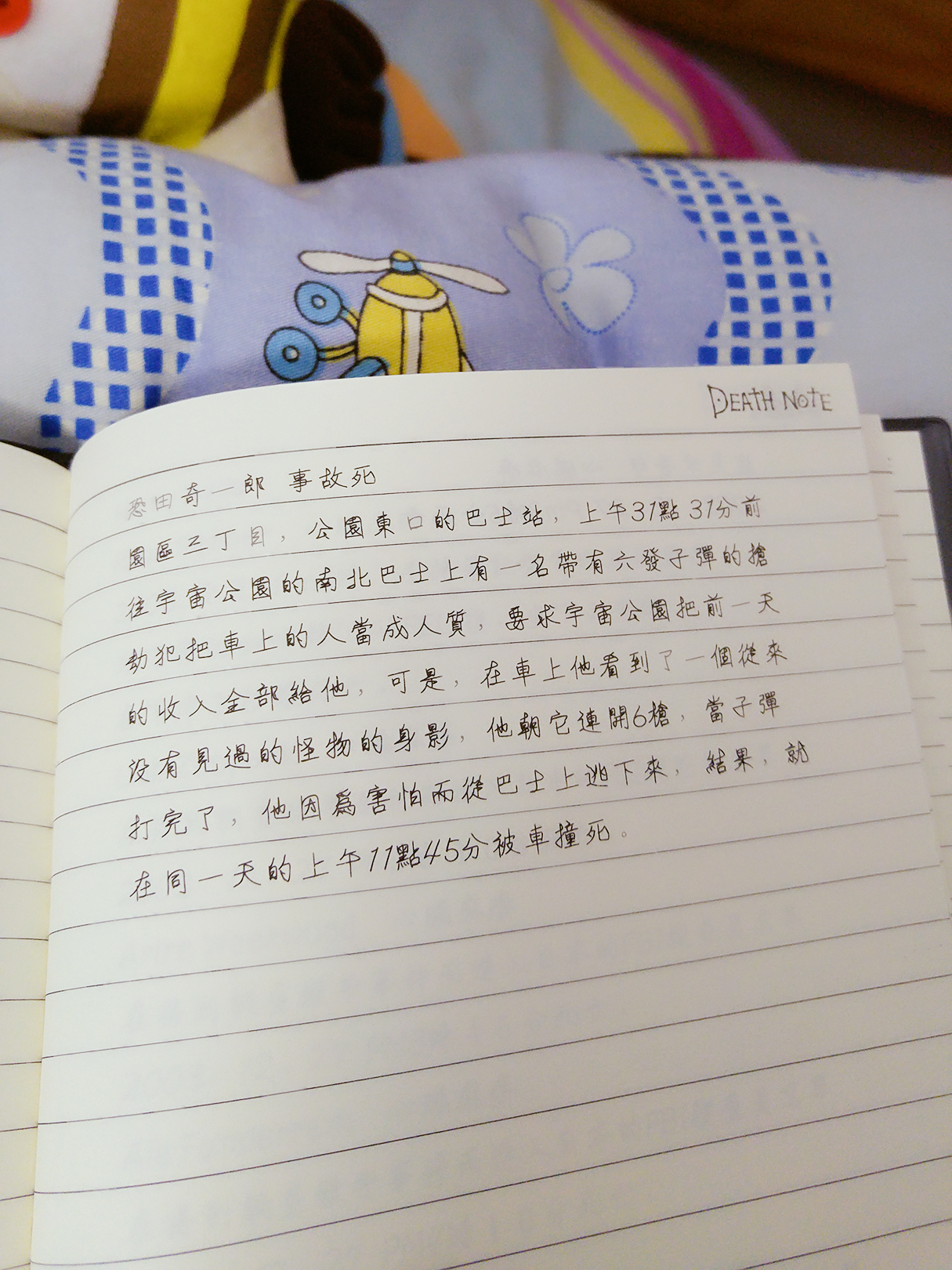 Both Light and Raye Penber write on this page. Penber kills all 12 FBI agents without even knowing it! It is cool to know the number of characters who have touched and/or written in this notebook. 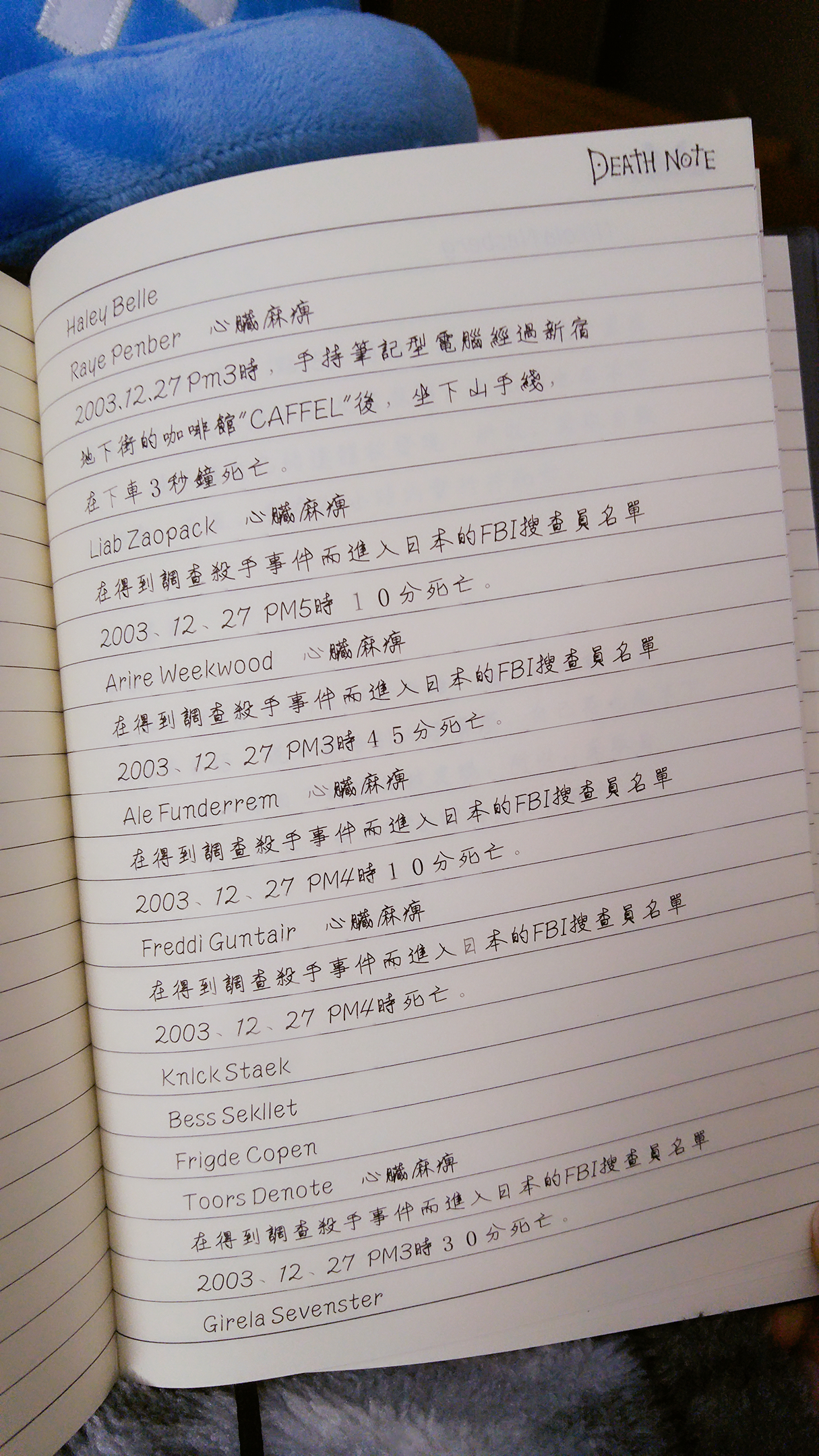 Naomi Misora (killed by Light) and Kiyomi Takada (killed by Teru Mikami) are amongst the other names written inside.

The last name in this is Light’s name, written by Ryuk. 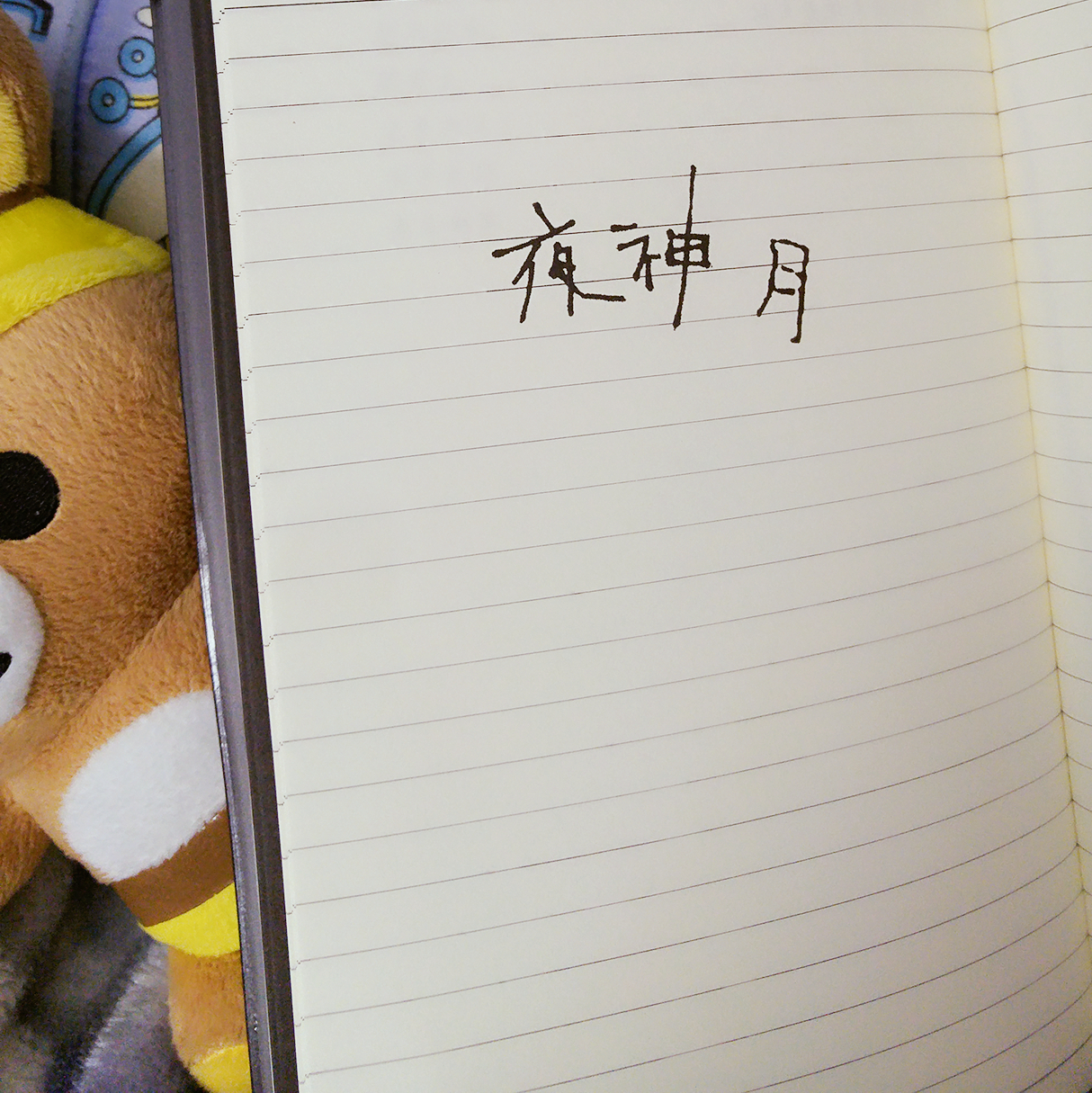 The notebook has the major names of victims killed by the Death Note. It does not have all the names (which I am thankful for because A LOT of criminals died in the series). It is not 100% accurate. For example, the page Penber wrote on was ripped out of the Death Note. The fact that it has the important deaths in one place is something that I like.

The rest of the notebook pages are blank, free for the owner to use. Hence, the feather pen. You may be wondering if I will be writing in this. I wanted this because I am a huge fan of the anime, and also for cosplay purposes. As far as I know, I will not be writing names down. 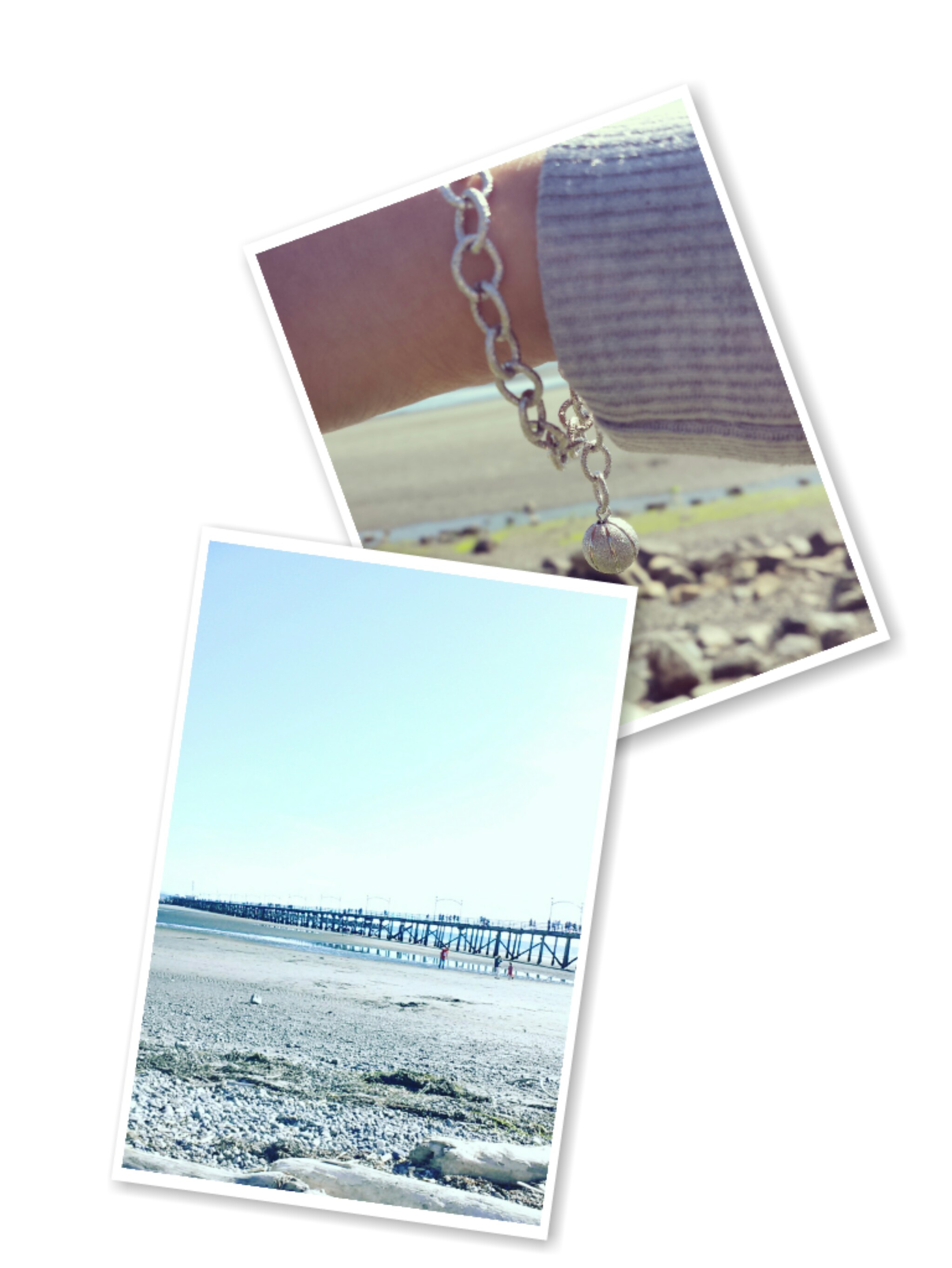 I have my favourite foods, like strawberries and vanilla ice cream, my favourite anime shows, games, music and more. Two of my favourite things are jewelry and the beach.

I am a big supporter of jewelry. I think boys should wear jewelry too. I like chain bracelets. Bracelets and earrings are very meaningful when they are from others. This bracelet was actually a present. Sapphire jewelry is very beautiful~

Beaches have oceans. I just to like to walk around and sit on the sand. It was a nice day to look at the ocean. 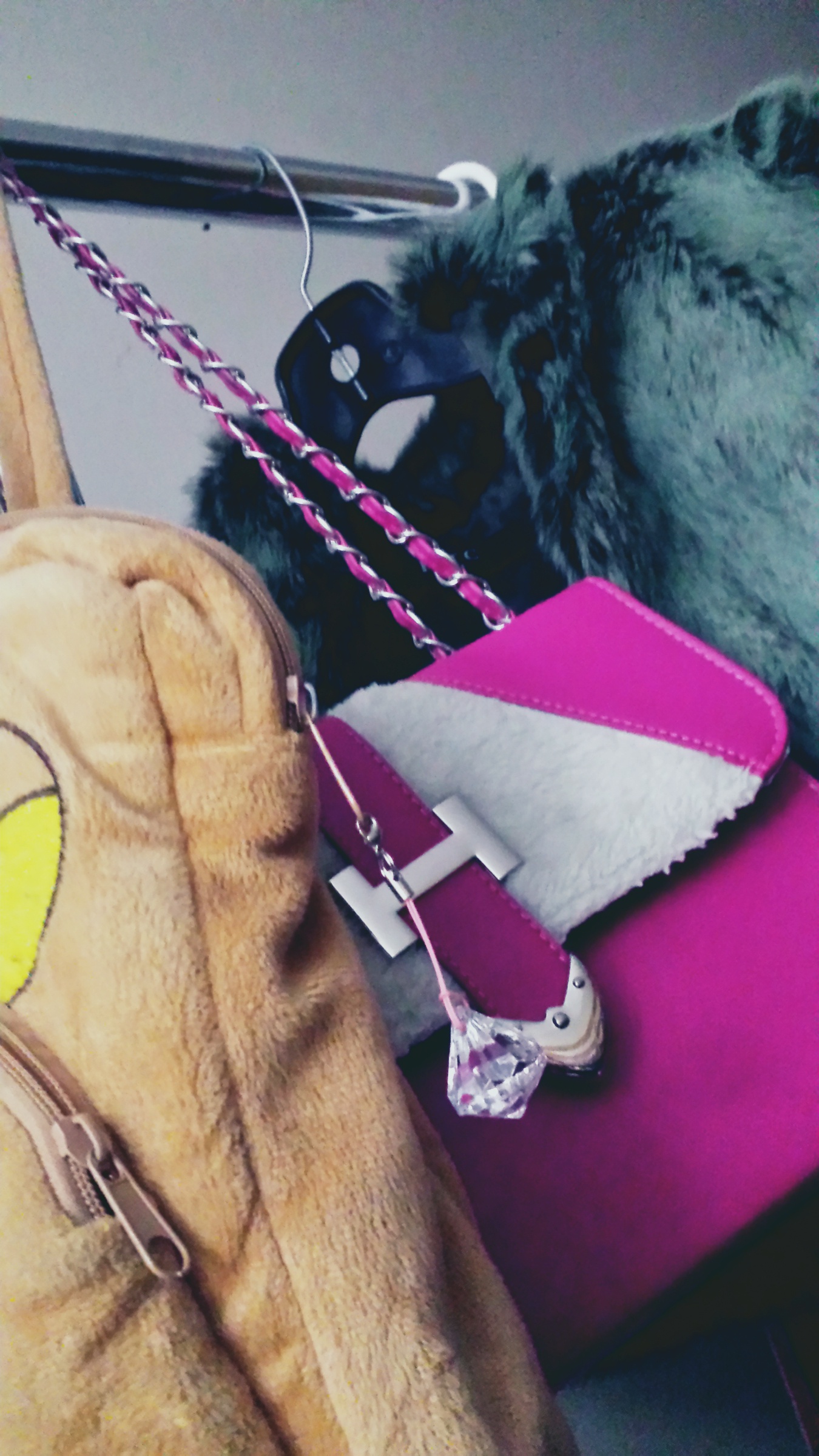 Taped to the card was a plastic jewel (pictured above). I made it to a keychain and it’s the perfect accessory for my new bag! 😍 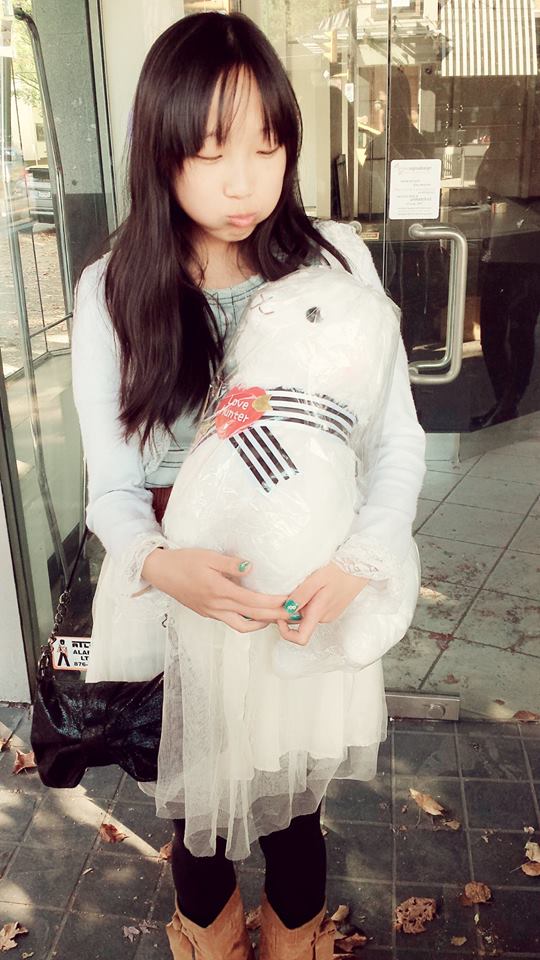 will blog when there is time ^_~ | food post here

Hydrangea petals pressed in 2021. Decorated some cardstock and it's ready to be used as a greeting card
Dried flowers 🥀
Paper felt heart
Flower petal heart
Explosion box I made in September 2021
Book pressed flowers 💐
Cat and flower keychain for the new year
More anime-inspired hair clips~
Lettering~
Happy New Year!
Opalite. This one gets a lot of compliments from strangers and friends 😆
Rose quartz