The Girl From the Other Side OVA is a 10-minute animated short based on the manga.

The first I noticed was the art. It’s very similar to the manga. I think this is very unique. Another thing is that the characters don’t talk. Instead, they convey everything through their actions.

We see an encounter between a human girl and a beast.

Whenever the beast touches a living thing, that thing is cursed. In these 10 minutes, we see that the little girl lives with the beast. The beast acts as her guardian. They live peacefully but the beast tries his best to avoid touching her, even though he wishes he could.

If you have 10 minutes to spare, I recommend watching this. It’s only 10 minutes. In fact, my only complaint is that it’s too short! I hope we will get an anime adaptation of the entire story. 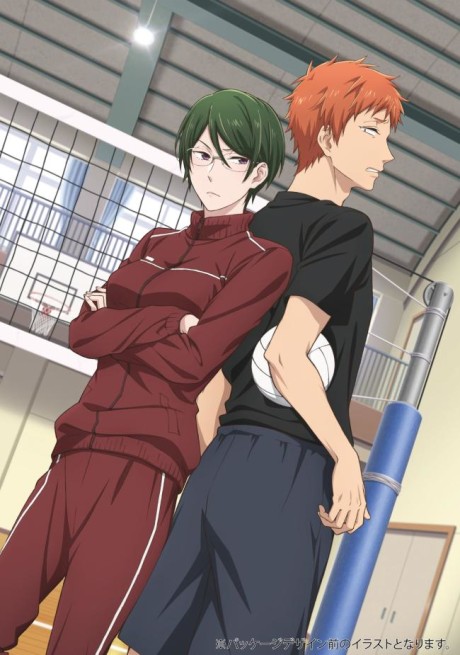 Synposis: Hanako Koyanagi tells Narumi and Hirotaka about her high school days and how she met Tarou Kabakura on the volleyball courts.

Thoughts: This was great because Koyanagi and Kabakura don’t get as much screen time in Wotakoi compared to Narumi and Hirotaka. If you enjoyed the Koyanagi x Kabakura pairing or want to learn more about their story, this OVA is for you. It was interesting to see what the characters were like in high school and how they became a couple. Koyanagi looked so adorable with her short hair cut! I think their love story is sweet.

While I’m waiting for Wotakoi season 2 and hoping to see progress in Nao and Kou’s relationship, this OVA was a sweet episode. I recommend this if you liked Wotakoi!

April 2020
Difficult Love ➡️ Matryoshka ➡️ Donut Hole
Gumi is my favourite vocaloid. I'm happy to cos as her again~
Cosplay soon 👀
Melon cream soda~ 🍈
I got the Rose 🌹 tea and Wild Strawberry 🍓 tea. They were delicious ^^
🦋
Throwback to the time I made chocolates with @gcflower 💜
Not a cos but I'm wearing one of my wigs with my day-to-day clothes and accessories ^_^
Yuno Gasai from Mirai Nikki
I made the hair ties~
Character vs Cosplay~

Making crafts out of the random things you see 😁 Now I have cute hair clips
Holly clip
Documenting the days through embroidery 🍓🍵
I loved our pumpkins so I made them out of clay 🎃
I was a little nervous about this and deliberately chose a thrifted book that I bought for a dollar ages ago. I kind of like it 🤔 Though I'm not sure how fellow book lovers feel about this 😅
Cross-stitch 🍀
I sewed tulips on my handkerchief. Adding a bit of joy to the things I like and enjoying the process 🌷
🌻☕
Blue rose 🌹
My cell phone strap broke so I made some improvements. A loop at the top and the beads were strung twice. I lost the pearl though 😅
Added flowers to my chain necklace 🌼
Felt clover plush~

The second image is from Spinning Gears, one of the last stories Akutagawa wrote before he died by suicide. It was published after his death.
The inari were much larger than I expected. So delicious, would definitely get it again 😋
Matching shoes
Visited four little free libraries today and dropped off books! 📚
Feeling festive 🎅🎄
Thanks again for the Agatha Christie book! Mystery books are totally my thing
Strawberry matcha latte 😋 Would definitely get this again if I'm in the area
Learned so much about the history of Chinese people in BC, Canada. It was also cool seeing all these older objects and photographs. I definitely recommend checking it out
Was gifted something precious. Adding this to my hydrangeas petal bookmark + card and clover made of stained glass. 😊 Melon soda made out of wax and other materials. Everything looks so realistic! Now I can always look at my fav drink. 😆 It looks cool with lights 🥰
Salmon, unagi, and scallop oshi. The snapper tempura was delicious 😋
Mom's bday 🎂
I love mochi! I tried Double Mango, Strawberry Shortcake, Green Tea, and Blueberry Yogurt