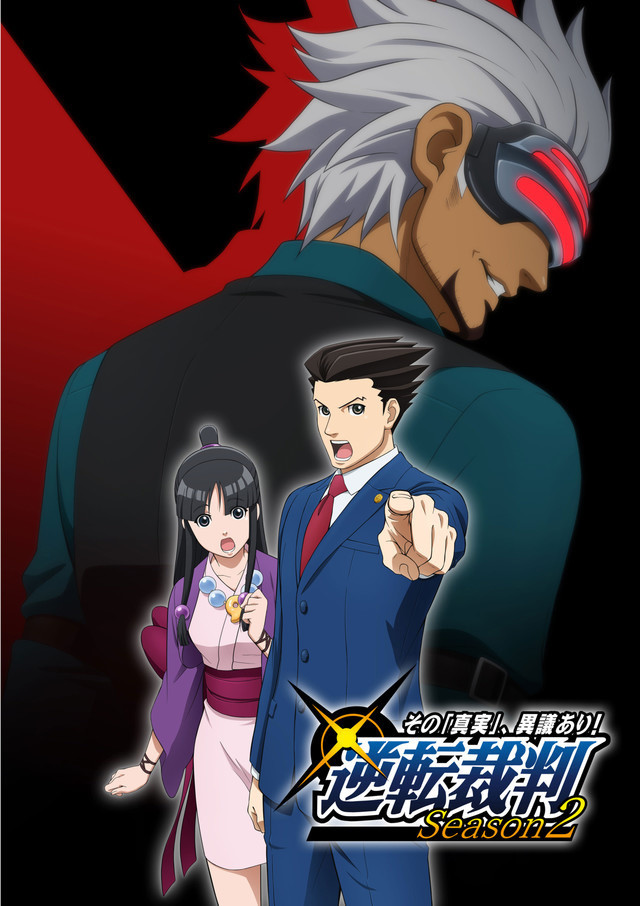 I reviewed the first season (post here) and gave it a good review. However, I don’t think I will be continuing this one because I wasn’t too impressed with how the first episode was handled.

I didn’t like the pacing of the first episode. It was very rushed. A criticism I had in my review on the first season appeared again because Phoenix figured out contradictions really fast. It makes the case seem so easy, but the game is a bit harder. I think they could have showed us Phoenix’s thought process more, instead of having him point out contradictions immediately.

It also didn’t sit right with me that there was such an energetic mood, even though someone had just been murdered. Maggey Byrde seemed a little too happy, even though the victim was her boyfriend. Then Gumshoe sends her roses at the end of the episode which was funny, but too soon! What kind of mood are they going for? The exaggerated effects made me laugh, so I guess they want the audience to laugh while watching this court case.

I love the opening theme because Yamashita Tomohisa (Yamapi) sings it. I recognized his voice right away because he was my idol when I was in high school. This was one of the best parts of the show.

Ace Attorney is an amazing Nintendo DS game series. I’m currently finishing the first two games and have the third game of the trilogy at home. Last night, I found out that an anime exists and I watched some episodes.

For those of you who are unfamiliar with Ace Attorney, usually a murder happens and a suspect is apprehended by the police. The main character is Phoenix Wright, a defense attorney, who has to convince the court that the suspect is innocent. He investigates the crime scene, interviews people and picks up clues. In the courtroom, he has to find contradictions in statements by different witnesses. Sometimes the real culprit is revealed at the start of the case, so the focus is on figuring out the motives behind the murder and how they did it.

Prior to watching it, I saw that its rating on My Anime List was not very good. It seemed like it wasn’t a very good anime so I didn’t have high expectations going into it. I watched some episodes in English sub and one episode in English dub. I usually only watch anime with English subtitles but the English voice actors did a good job! The 2016 anime covers the first two games in the trilogy and apparently another season is coming out this October 2018, which will cover the cases in the third game.

When I looked at the graphics, the first thing I noticed were Phoenix’s eyebrows.

They look over the top, right? Then I realized something. Oh wait, Phoenix’s eyebrows ARE like that in the game too! Even though he looks ridiculous here, that’s just how he looks and I like that the characters’ appearances stayed true to the game. Another thing that might create distance with watchers are the exaggerated facial expressions the characters make.

If you’ve played the games, you’ll know that this sort of face is nothing new. The game can get ridiculously funny a lot of the times. My point is: The anime is showcasing the kinds of things we see in the games. It’s mirroring the game well. I love that the game’s music is played during the trials.

There are minor changes in the anime, but the court scenes were faithful to the game’s events. The plot and cases were mostly the same, which I liked. Episode 13 strayed from the game’s plot because they added new content about Phoenix’s childhood with Miles and Larry but I don’t have any complaints. It was a really sweet episode and I loved it a lot! The game did not give as much focus on Phoenix’s relationship with Miles when they were little. 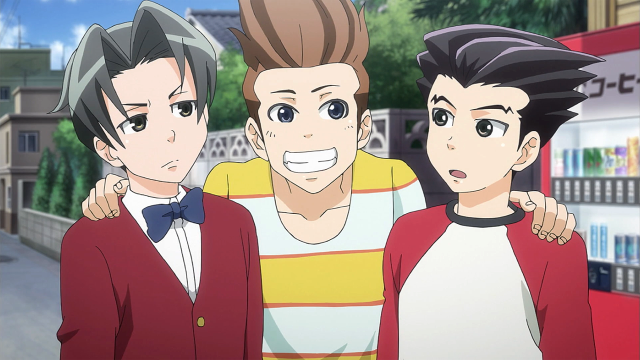 One case from each game were missing in the anime. They were the last case in the first game and first case in the second game. I’m not sure why they were left out, but it’s not a huge deal. You don’t need to be familiar with the games in order to enjoy the anime!!

My one complaint is that the cases don’t seem too hard in the anime. Trust me, the game can get pretty challenging. Phoenix in the game spends a lot of time travelling back and fourth to different places for his investigation in order to find clues to help his case. It is time-consuming and finding contradictions can get a little difficult. However, if Phoenix spent a lot of time on everything, then the anime would feel really long and boring. It’s not as fun if you’re not the one doing the work.

My final verdict: I was pleasantly surprised by the fact that I enjoyed this anime. I don’t agree with the poor ratings and this post is my defense. Of course, the game is far more superior. The anime does not even come close, but it is still enjoyable! The extra childhood scenes in episode 13 influenced this decision.