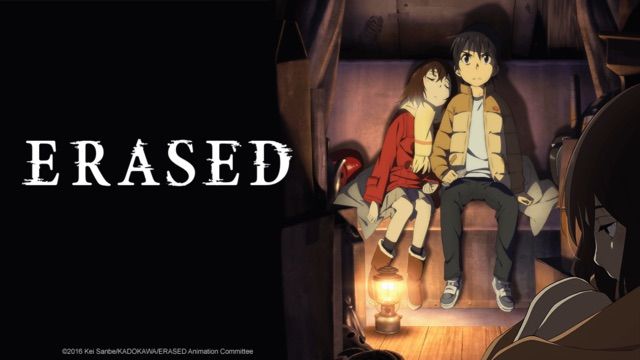 Synopsis: Satoru Fujinuma is a man in his thirties living a discontent life as a pizza delivery man and rejected manga artist. He has a unique power that grants him the ability to go back in time whenever there is an emergency situation. He returns home one day, and finds his mother laying on the floor in a pool of blood. Shocked, he runs out of the house and mistakenly becomes targeted by the police for his mother’s murder. Satoru goes back in time, but finds himself 18 years in the past.

Satoru realizes that if he wants to prevent his mother’s death, he has to revisit the events that took place 18 years ago. His mother’s death is related to a serial killer who kills children, and Satoru has to solve who the killer is while he is in the body of his grade school self.

Thoughts: I really enjoyed Erased. The characters were likable, particularly Satoru as a child, Satoru as an adult, Airi, Kenya and Sachiko (Satoru’s mother). This is a show you can binge watch because every episode is engaging. Satoru goes back and forth between present day and the past, which was interesting to watch. The ending song is great. Erased is a unique anime that has an original plot and great characters.

My only major complaint is the ending scene where Satoru is confronted by the killer. It doesn’t follow the manga, which is fair but it was too rushed. If they paced it in a better way, it could have potentially been better. The last episode was a downgrade from the rest of the series. I did like the scenes that happened after the ending. The Japanese live-action on Netflix has a better ending because it’s more complex and involves the other characters more.

Rating: 9/10 (would have been 10 if it weren’t for the anticlimactic ending)

Thank you note 💌 The contents are obv private but here's the before photo!
Hydrangea petals pressed in 2021. Decorated some cardstock and it's ready to be used as a greeting card
Dried flowers 🥀
Paper felt heart
Flower petal heart
Explosion box I made in September 2021
Book pressed flowers 💐
Cat and flower keychain for the new year
More anime-inspired hair clips~
Lettering~
Happy New Year!
Opalite. This one gets a lot of compliments from strangers and friends 😆