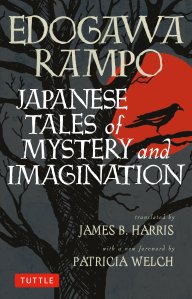 Edogawa Rampo is known as the Father of Japanese mystery writing. If you are into mystery or horror, read this book! There are nine short stories in this book, and I’ll be talking about two stories that left lasting impressions on me.

I was sucked in the story before I realized it. The writing is superlative! It’s about a person who stays inside a chair and his experiences of people sitting on him. It was weird but it was right up my alley. I was so fascinated, I could not stop reading.

Then I read Junji Ito’s retelling of the story! Junji Ito is a popular mangaka who specializes in horror manga. Junji retells The Human Chair with an alternate ending and I loved it. I recommend reading Rampo’s short story then reading Junji’s manga.

This shouldn’t be surprising, but many of these stories are about murder and a lot of the times they are told from the murderer’s perspective. I get that it’s not for everybody!

10 thoughts on “Book Review: Japanese Tales of Mystery and Imagination”