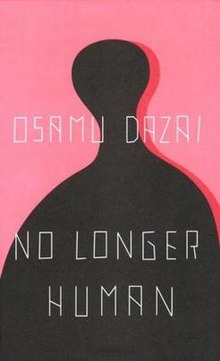 Background information: This book was written by Japanese novelist Osamu Dazai. It’s the second best selling novel in Japan. Dazai committed suicide shortly after the book was published in 1948.

The book is divided into three notebooks: childhood, high school and university, and adulthood. Yozo never thought of himself as a human. The book is about his life, and a lot of miserable events happen to him. Yozo never truly felt happiness.

I became interested in No Longer Human because a lot of people said that it was “depressing” to read. However, I never felt sad while reading it. The book is in first person and I understand why Yozo did the things that he did. I don’t think Yozo did anything wrong and never felt frustrated with his actions either. Instead, the book made me feel very calm. I never felt angry or any other strong emotion. A friend of mine stopped reading the book halfway because it became depressing to read. I had a different experience because the writing compelled me to finish the book. Even though my heartstrings were not tugged or pulled, I was interested in reading the story to the end.  I was about to finish the book without having formed an emotional attachment to it until I read the last page of the third notebook.

I was shocked. There are three sentences on the last page, and I could not believe it. The last page of the third notebook changed my view of the book completely. The writing is phenomenal! I do recommend this book.

Fair warning: It may be triggering for some people because there is suicide, death, rape, and self-sabotaging behaviour.

Hydrangea petals pressed in 2021. Decorated some cardstock and it's ready to be used as a greeting card
Dried flowers 🥀
Paper felt heart
Flower petal heart
Explosion box I made in September 2021
Book pressed flowers 💐
Cat and flower keychain for the new year
More anime-inspired hair clips~
Lettering~
Happy New Year!
Opalite. This one gets a lot of compliments from strangers and friends 😆
Rose quartz